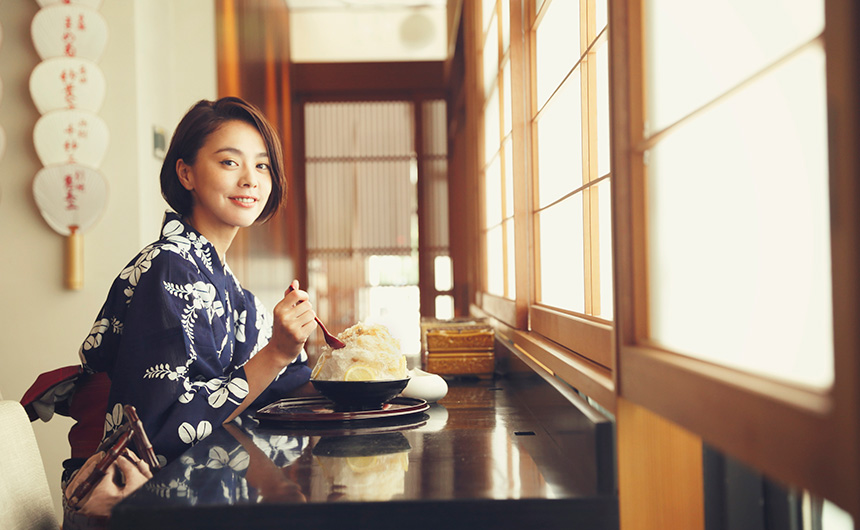 Each of Japan’s four seasons offers food, events, and cultural phenomena that you can only experience in that given season. See the summer “cool” with your eyes, indulge in its scent, taste it with your taste buds, feel it with your skin, and enjoy hearing its sounds. Clad in a yukata robe, actress Reina Asami will introduce us to the deeply emotional summer in this edition.

The touch of a yukata robe on the skin is a full-body experience. The texture of summer.

The feeling of reluctance to leave behind the sensation of your sheets in the morning, the feel of holding your favorite pen tight in your hand at work, the feelings of comfort when interacting with other people… We live our daily lives from the time in the morning when we wake until we go to bed at night intimately in touch with “sensations.”

The major difference between “touch,” which we feel when our skin comes in contact with things, compared to our other senses such as sight and hearing is that we experience it with our entire bodies. It is also an essential component of enjoying fashion. The reason we can enjoy the touch and not just the appearance of textures such as the feel of smooth silk and the soft and comfortable jersey fabric is precisely because we have this delicate sense of touch.

We indulge in the feel of seasonal materials with our entire bodies. Japanese people have enjoyed the feel of summer through yukata since long ago. Yukata were originally used as clothing to wear after bathing during the Heian period (794 – for about 400 years), spreading to the common people in the Edo period (1603 – 1868). The refreshing fit of wearing a yukata made from hemp with a smooth and cool cotton is a sensation you cannot experience with any other clothing. 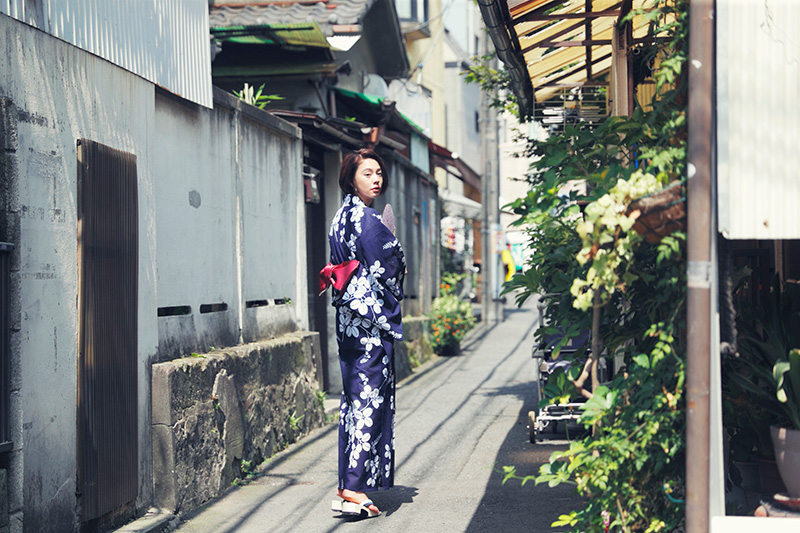 Walking down the street under intense, bright sunshine clad in her yukata, we asked Asami about the charms of the garment. She replied: “Yukata are nice, aren’t they? My parents dressed me up in yukata often when I was a child, and they remind me of going to summer festivals. Although yukata really stoke the sense of summer, it’s not quite the same as feeling like letting loose — rather, you stand up straight with a sense of dignity.”

That natural sense of feeling slick and having a “softer” demeanor than usual when wearing a yukata is perhaps a sensation unique to Japanese people that has remained unchanged since the Edo period. Speaking of which, we do frequently use words that rely on our sense of touch even for things that we cannot actually touch — such as “soft” demeanor and “warm” feelings. I get the sense that this also speaks to how important our sense of touch is to living and adding depth to our everyday lives.

The cool air produced by handheld paper fans. The scent of summer.

The first cellular phone in history was made roughly 40 years ago. Ever since, the size, weight, and features of cell phones have evolved in the blink of an eye to the extent where we can even take high-resolution videos on them now. It is an age of rapid ebbs and flows in things and information, yet on the other hand, there are also some things that have continued to be favored with the same shape and features for long periods of time. The uchiwa, or handheld paper fan, is among one of summer’s must-haves. Uchiwa made of bamboo and Japanese paper first appeared around the end of the Muromachi period (1336 – 1573). Ever since, they have been used by loads of people as a tool to help combat the summer heat. 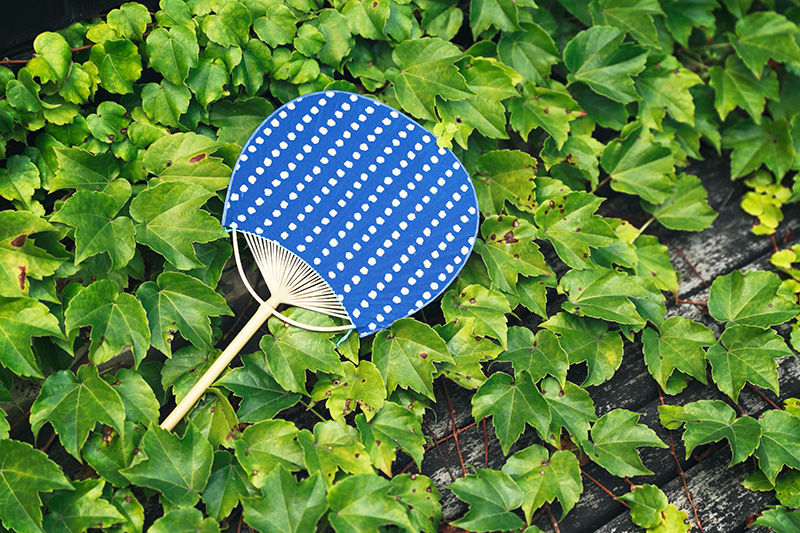 Now, there is apparently a growing number of people enjoying the “air” produced by uchiwa through their sense of smell rather than just their sense of touch. Allegedly, scenting uchiwa with cool fragrances such as mint-based aroma oils or placing uchiwa in boxes filled with incense during the winter enables you to conjure up an even greater chill in the summer along with the cool air as a fresh scent wafts about. 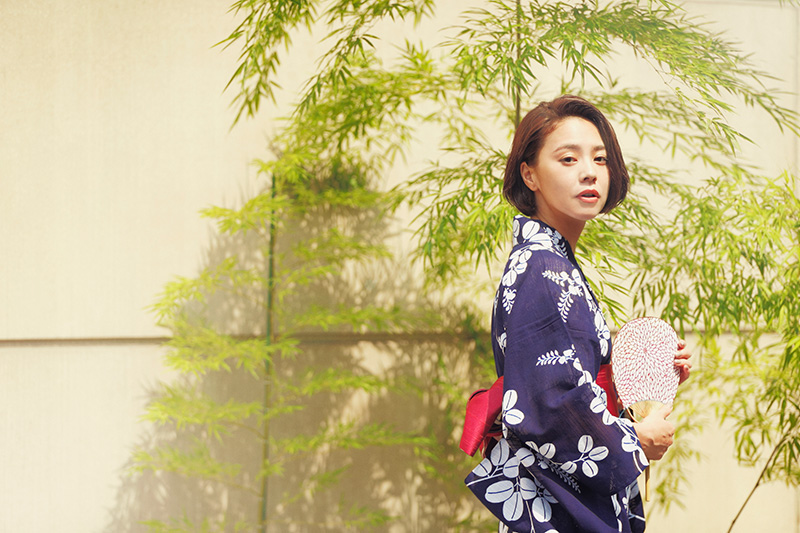 Shaved ice — Beloved by the writer Seisho Nagon. A classy taste of summer.

The first reference to “kaki gori”, or shaved ice — which is alleged to have already been in existence in the Heian period — in writing was left by none other than Japan’s foremost master essayist: Sei Sho-nagon! The Pillow Book, which young women at the time were said to have absorbed themselves in reading, touches on shaved ice as follows: 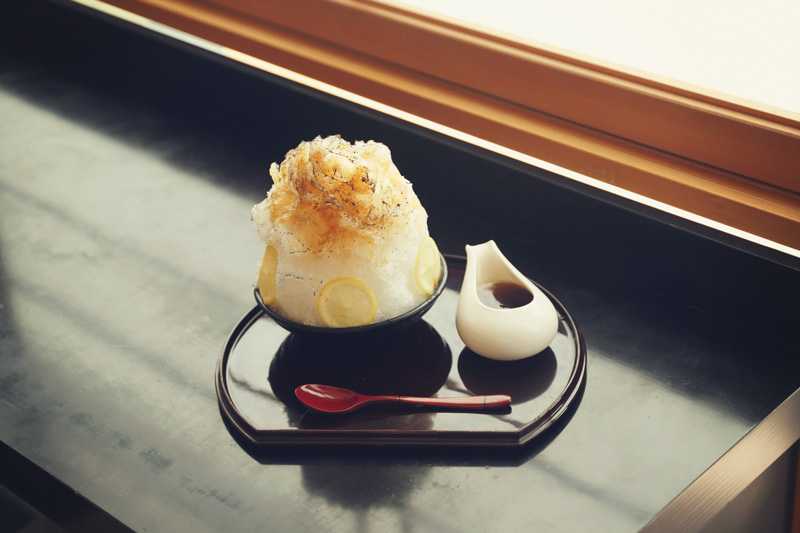 Now, over 1,000 years later, rather than falling out of favor, the culinary culture of eating shaved ice in the summer is in fact experiencing a fresh boom. Masterpieces of shaved ice featuring ingenuity are served in different places throughout Japan. One of the charms of this shaved ice, as you might expect, lies unchanged in its elegance. Pour some syrup on the fluffy, soft ice in a beautiful dish and take a scoop with a spoon. The transience of the shaved ice melting before you realize it in your mouth lends more profoundness to its taste. 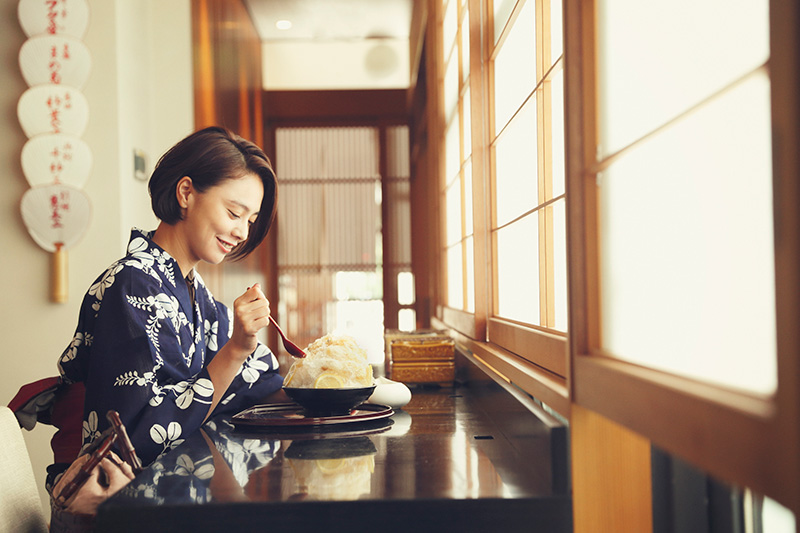 Asami notes: “Shaved ice looks beautiful piled up in its vessel. When you eat it, it melts like snow and the subtle sweetness that lingers around in your mouth at the end is nice. I like strawberry and melon-flavored syrups too, but my recent favorites have been sophisticated syrup flavors like matcha (green tea) and bancha (coarse tea) that go well with the grown-up palate.

We went to eat some shaved ice at a quaint sweet house. Heading out in a yukata makes the sense of summer even more palpable.

Usuhari thin drinking glasses — so thin a chill resides in the glass itself. Visually-pleasing summer.

Colors and materials give us common sensations visually. Looking at fur material with a heavy color tone gives us a sense of “cozy” warmth, while looking at a clear glass visually gives us a sense of a “frigid” freshness. What makes us want to dish out or pour everything from somen noodles to hiyayakko (chilled tofu), sashimi (fresh raw fish), all the way to alcohol in a clear, glass container is that the appearance can do nothing else but orchestrate a refreshing atmosphere. 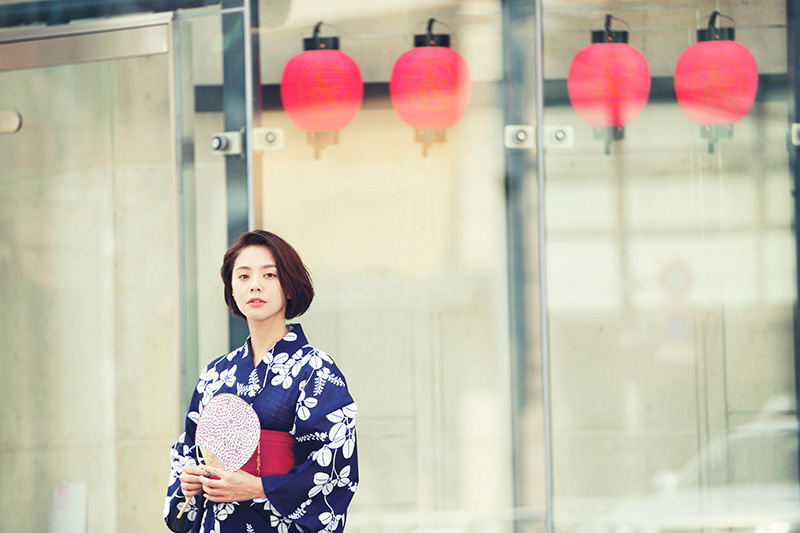 Now, if we look into when the culture of favoring glass products in the summer came about, the answer would appear to be during the Edo period. Glass products, which had only been used amongst the upper classes up until then, spread to commoners beginning in the Edo period.

Clear glass gives us a light and refreshing sensation, but the effects are even greater if the glass is usuhari glass. Just getting a glimpse of an usuhari drinking glass gives a vivid sense of everything from how light it would be when taken in hand, to the sensitive rim defined by its thinness, and the comfort when touching the glass. 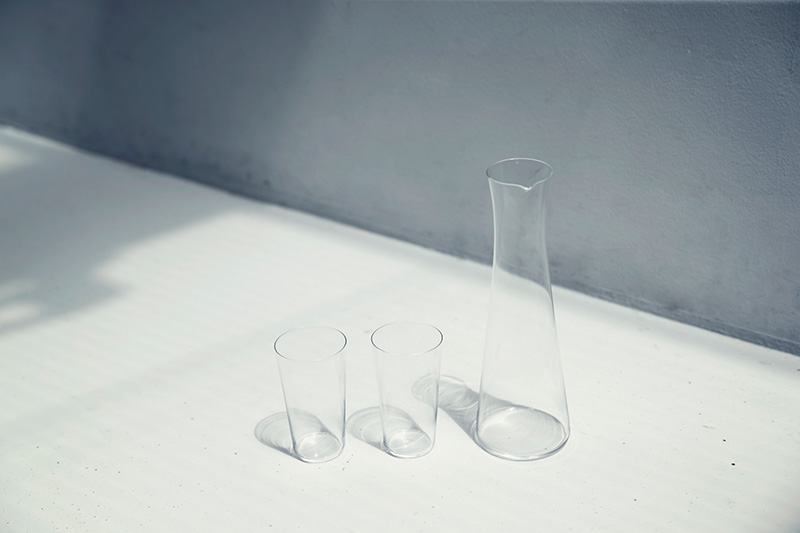 Asami is also an avid user of usuhari drinking glasses. “Drinking barley tea out of an usuhari glass in the summer is amazing. The refreshing air put off by the appearance of the glasses is also perfect when treating guests. When I have friends come over, I pour them tea in usuhari glasses in the afternoon or beer at night.”

Jingle jingle… The tone of wind chimes cools even our minds. The sound of summer that conjures up freshness.

While this goes for all of our five senses, emotions emerge when our senses are stimulated. This is also true for our sense of sound. Everyone is familiar with stories of hearing the simultaneous hum of the cicadas giving us the sense that the heat has intensified, while the sound of alarm clocks alerts us of “emergencies,” sometimes waking us up in a foul mood. On the flip side, there are also a number of sounds that put us gently at ease just by hearing them or get us excited. Sounds like the chirping of the birds, the babble of creek streams, the sound of coffee brewing, the voice of your crush, and, depending on the person, the sound of a notification from your favorite messaging application…?

Our sense of sound is a very intimate sense. When our sense of hearing is stimulated and sounds enter our ears, we imagine all sorts of stuff, like cold and heat, visual scenes, and even how others feel. 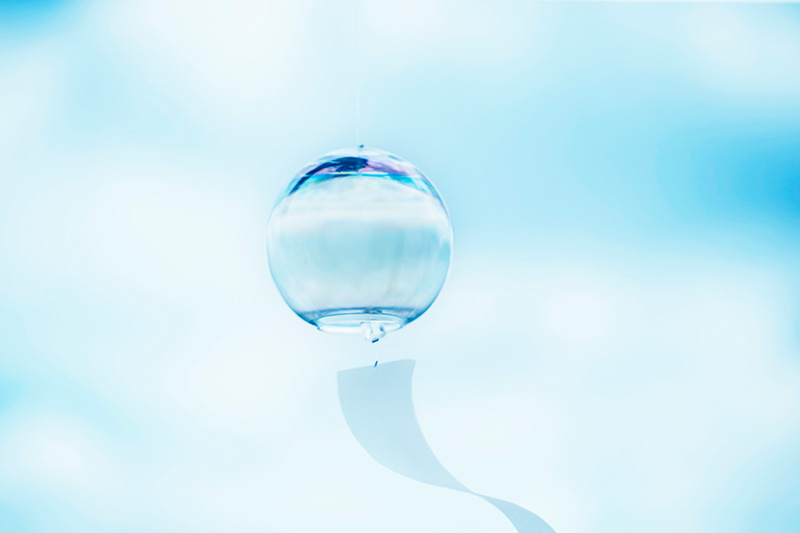 And then there are wind chimes. Saying the word aloud, fuurin in Japanese, even sounds refreshing, and the amazing thing about them is that even people who have never had wind chimes at home sense that the jingle jingle of the wind chimes marks the sound of summer or feel that the sound is just so refreshing. Since we can associate the sound of the bells from the wind chime with the “breeze” that makes them ring, perhaps the sound gives everyone a sense of the cool.

Japanese people have enjoyed the hot season of summer since long ago, leveraging the power of wisdom and culture. Summer is set to kick into full gear just around the corner. Use your five senses to their fullest to enjoy summer with your eyes, ears, skin, nose, and tongue. 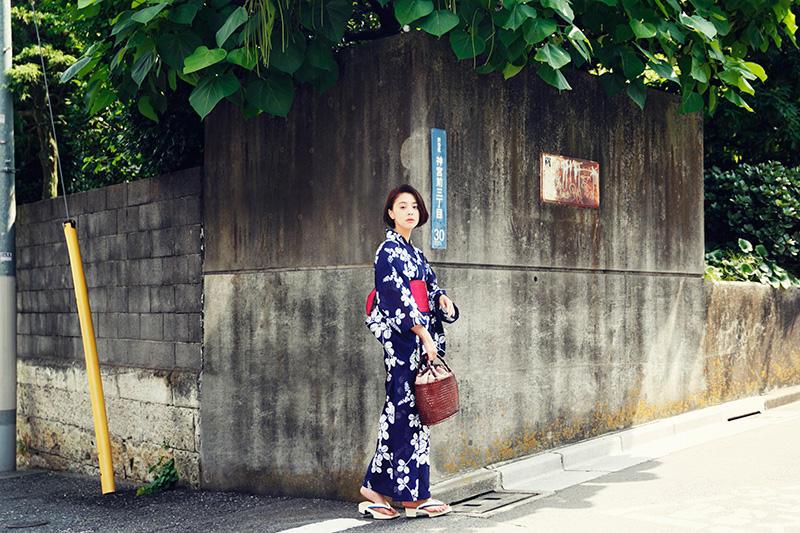 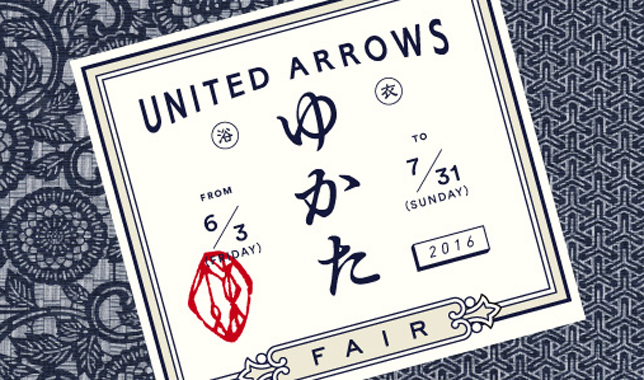 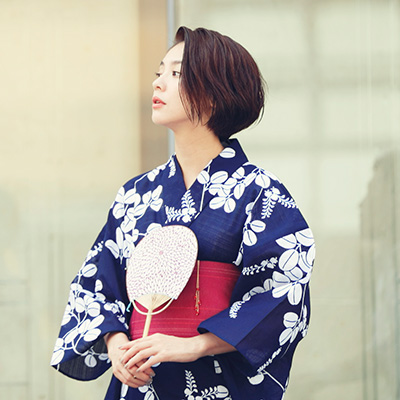 After being a popular model for the magazine SEVENTEEN, Asami is currently active as an actress in a range of areas including television dramas, movies, and plays. She has appeared in the television drama Full Throttle Girl, the movies Princess Jellyfish, April Fools, and more. She has also recently been engaged actively in modeling, gaining popularity from magazines such as InRed and Otona Muse.

After being a popular model for the magazine SEVENTEEN, Asami is currently active as an actress in a range of areas including television dramas, movies, and plays. She has appeared in the television drama Full Throttle Girl, the movies Princess Jellyfish, April Fools, and more. She has also recently been engaged actively in modeling, gaining popularity from magazines such as InRed and Otona Muse.