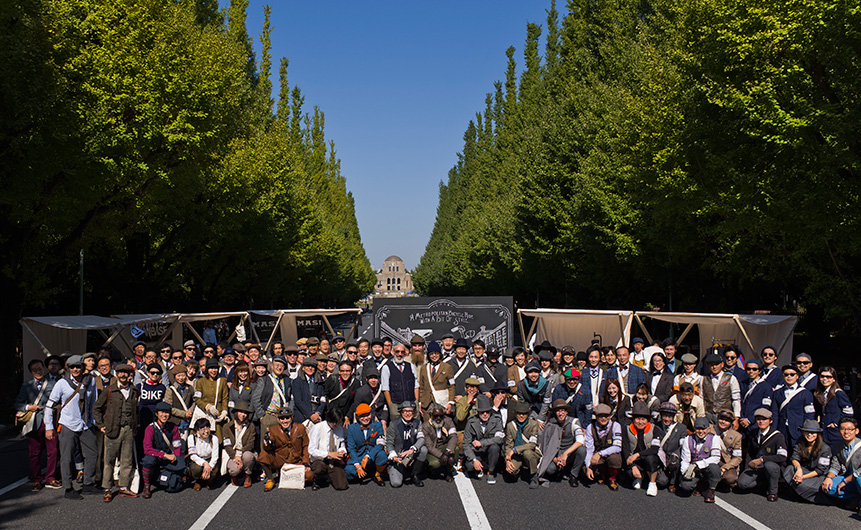 The Aims of “The Tweed Run”

On the coming 18th of October (Sunday), The Tweed Run Tokyo 2015 will be held (it will be the fourth Tweed Run to take place in Tokyo). It is an event with an exquisitely simple concept. Participants dress themselves in tweed, that traditional British fabric, mount bicycles, and tour around Tokyo. The simple event, however, is imbued with certain special designs by its host, H. Kuriya, who is the head of the Steering Committee. Kuriya has given an outline of these special designs.

To Wear and Be Seen Wearing Western Clothing, and to Enjoy the City

After its inauguration in 2011, The Tweed Run Tokyo has now seen its fourth installment. My initial inspiration to hold the event came when I was an employee of United Arrows. I thought that there were too few utsuwa, or opportunities, for customers to wear the clothing they purchased from us, and at the same time, I wanted to seek out the nuances of (Western) clothing and marketing.

I did not want the clothing so generously purchased by customers to become mere ballast for their closets and I wanted to express the charms of being able to wear that clothing. So, I thought that I had to provide a place for it “to be worn.” And if such a place were provided, it would also become a way to “to be seen.” For example, all of the terrace seats at French cafés face the avenue. They are arranged this way so that guests can watch the city and the people passing by. In other words, there is an awareness of “being seen” and it stimulates people’s aesthetic sense. My hope was that this event in Tokyo would also encourage people to dress up and participate so that a similar aesthetic sense would be engendered by the glances traded amongst people who love Western clothing. 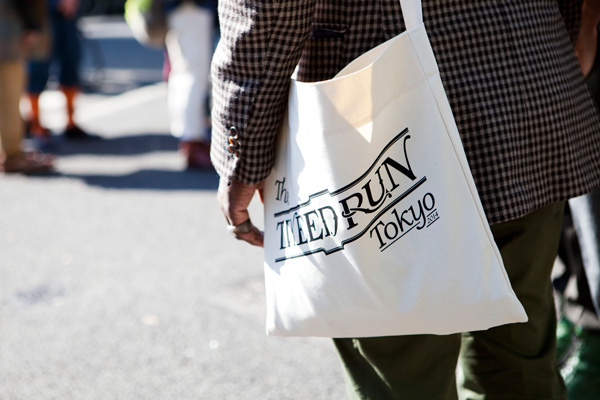 Now, “Why the bicycles?” one might ask. This was because I wanted people to enjoy the city at the same time that they enjoyed fashion. Every time I travel abroad and look back at Japan, I feel that it is a wonderful country and this inspires me to tour the cities of Japan while viewing them with the eyes of a foreigner. After wondering whether I could have this outside perspective while being a Japanese person still in Japan, I hit on the idea of riding bicycles. They can squeeze through the narrow streets and they let the rider enjoy a nice, full view of the surroundings. They are, quite simply, the perfect vehicles for discovering the charms of the city. If we observe the city from a slightly different perspective, we can uncover previously overlooked surprises.

Soon after I hit upon this idea, I just happened to find out that there is an event held in London called The Tweed Run. People wear tweed and cruise around the town on their bikes. I thought it was such a simple and straightforward concept that I immediately got permission from the London office to hold an event in Tokyo. The inaugural Tweed Run Tokyo took place in the fall of 2011. 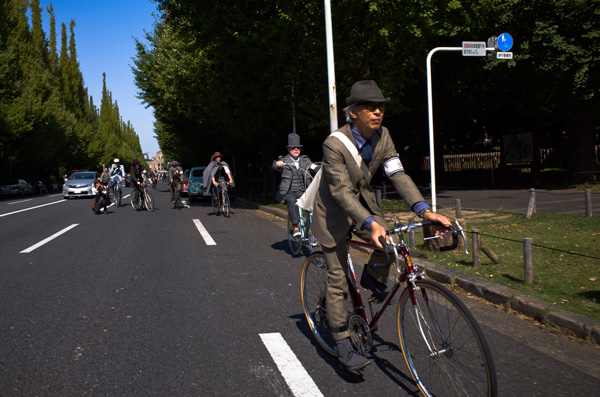 Endeavoring to Strengthen Ties with the Community

Holding the actual event, I found that things ran even more smoothly than expected. On top of enjoying the clothing and discovering interesting aspects of the city, the Tweed Run also brought opportunities for participants to interact with people from different backgrounds. This gave me the sense that I had been able to deliver the type of utsuwa, or opportunity, that I had envisioned. Later, I moved forward with that sense of accomplishment and hosted two Tweed Runs in Nagoya.

On Saturday, November 7, The Tweed Run Bishu 2015 will take place, marking the third event in Nagoya. The Bishu region around Nagoya and Ichinomiya is known as one of the world’s top textile producing areas and, of course, they also make tweed. It is an area redolent with older Japanese ambiance, with saw-tooth roofed factories and many opportunities to discover the attractiveness of Japan, all of which makes it very suitable for our event. This coming event will include the mayor of Ichinomiya, as well as dozens of textile companies from the Bishu region as the Run becomes a town-wide event. 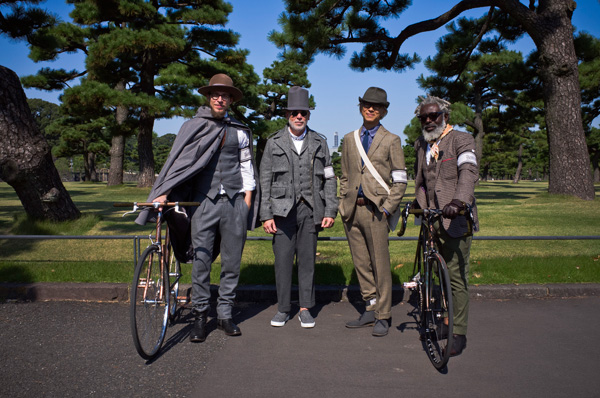 The actual Tweed Run in London enjoys this sort of city-wide support, with many areas that are typically off limits (such as gardens and public halls) made open for entry. If this level of accommodation occurs in Japan as well, The Tweed Run could be held in many parts of the country other than Tokyo and Nagoya. I would like to manage the event with this possibility in mind going forward.

And there is one more very key point. Currently in Japan, social pressure is running against the bicycle movement. The reason for the resistance is the poor traffic manners of those on two wheels. I could not bear it if bicycles were to take on a negative reputation. They are amazing vehicles with no less than 100% clean energy. As someone who cherishes bicycles, I would like to do whatever I can to stem the tide of angst toward them. During The Tweed Run, we teach participants to heed the rules of the road, which I hope will help improve adherence to traffic laws.

It is my opinion that small businesses like us must be the infrastructure within society. That is, we must be an indispensable part of our communities. Hence, we must be ever more cognizant of society and build stronger bonds with our neighbors. The Tweed Run is one means of doing so. Although we have to use a lottery system to select participants, entrance is open to anyone 20 years of age or older. I hope that many different people will join in the event and experience our philosophy first hand. 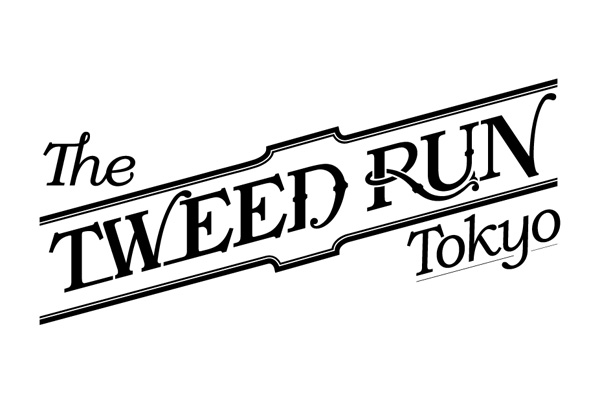 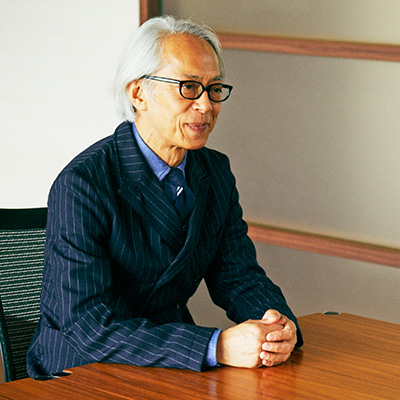 Born 1953. Senior Advisor in charge of creative direction. Entered the fashion world in 1977. Has served as judge on many occasions at the graduation show for the Royal Academy of Fine Arts Antwerp. In 2004, received an Honorary Fellowship from the Royal College of Art, UK.

Born 1953. Senior Advisor in charge of creative direction. Entered the fashion world in 1977. Has served as judge on many occasions at the graduation show for the Royal Academy of Fine Arts Antwerp. In 2004, received an Honorary Fellowship from the Royal College of Art, UK.