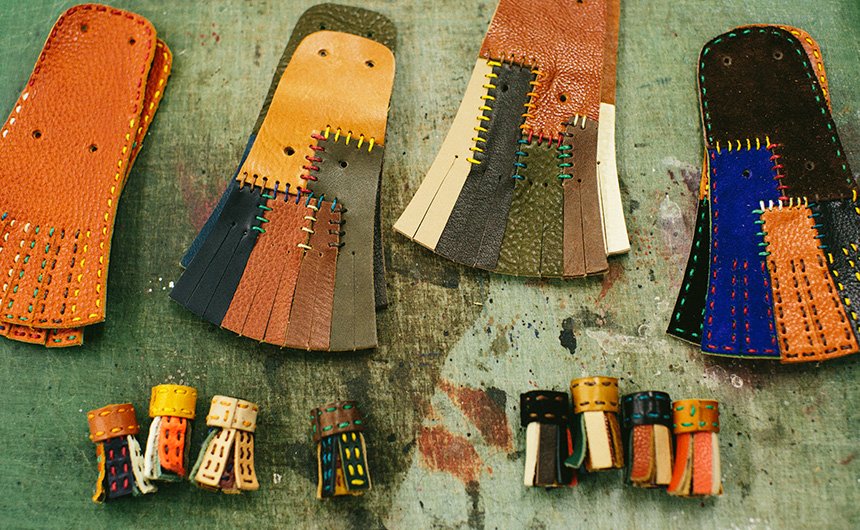 A story full of time and effort

International Talent Support (ITS) is a European fashion award widely viewed as a gateway to success for young designers. At the 2014 edition of this prestigious contest, shoe designer Takafumi Arai was the recipient of the YKK Special Award in the accessories category. What he designed were shoes that conveyed a previously unseen, original worldview. Upon seeing them, United Arrows buyer Shoji Uchiyama said: "I could feel his passion." This season, Arai and Uchiyama began their efforts to see that passion reach as many people as possible. On the day when those first thumping winter footfalls could be heard, Uchiyama paid a visit to Arai.

What’s behind a unique design

Uchiyama: When I first had the chance to see the shoes you made, what went through my mind was, “Wow, these are incredibly unique.” I knew it from the moment I saw that they were entirely hand-sewn, and also the design is just really fascinating and wonderful. Because you’ve upset, in a good way, the conventional wisdom that “leather shoes have to be made this way.” Mr. Arai, where did you study shoemaking? 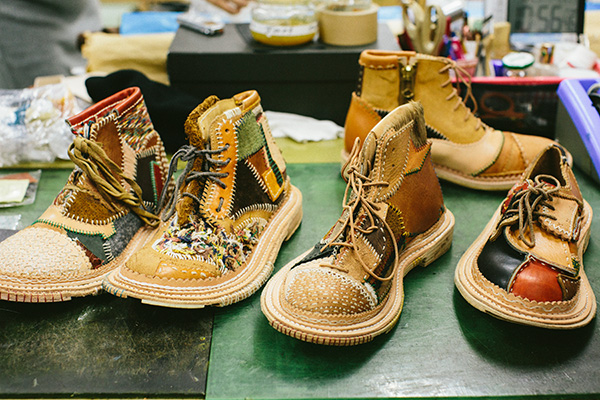 Arai: What I graduated from was a vocational school for clothing design. I didn’t learn shoemaking there, so it was more a matter of self-instruction. I started by watching the work at shoemakers’ shops here in Japan, then material and textile shops in Asakusa. After that it wasn’t just in Japan, but shoemakers and exhibitions and so on in the UK, Italy, Germany. Mostly I did my learning “where the action is.” While I was in vocational school, after classes ended I would visit shoe factories in Asakusa, and I’d stop the craftspeople who were trying to go home, or were just still around, and get them to teach me. In doing so, having conversations with a lot of craftspeople, I picked up knowledge and skills.

Arai: In particular, meeting one of the craftspeople who worked at a factory in Asakusa was huge. I would go to show shoes I’d made myself. Every time, I would ask for lessons, and I gained some know-how, and honed my craft. That factory is a little different. They make a great variety of shoes, from authentic, orthodox shoes with a Goodyear welt (a manufacturing method for shoes – ed.), to designer items and things with a sense of craft. The various things that were shown to me there come through in the shoes that won the award. 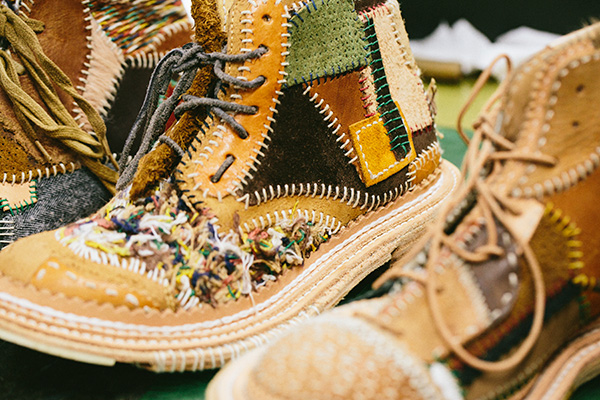 Uchiyama: Hearing you talk about this just now, I feel like I get it. Because, in your works, I feel not just that the design is captivating, but also, “Hey, these are made with feeling.” With something like passion. Showing shoes you’ve made and asking for lessons over and over, you can’t do that if you don’t really love shoes. They’re definitely full of your passion and emotion.

Arai: I do really love shoes. I’m captivated by the beauty of their form from a fashion point of view, and the functional beauty in how your posture and way of walking change depending on what you’re wearing. 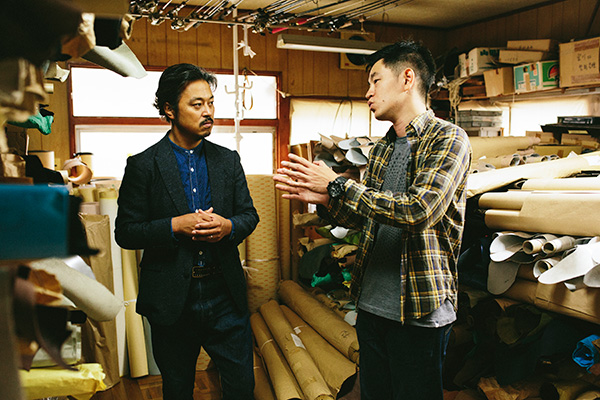 Uchiyama: The patchwork look of these shoes comes from how you’ve made them by taking unused “leftover leather” and recycling it. What is the thought process behind that?

Arai: The origin, so to speak, of the things I’ve made so far has been in how I’ve visited a lot of the actual places where these things are made, the factories and places like that. One of those places I visited was a tannery in Tuscany, Italy. When they tan the leather, they still stubbornly follow a long-standing, traditional method. Having seen them working like that, and getting to know their sentiments, I couldn’t throw away any leather no matter how unnecessary. I had to save it for something. As a designer, I want to put their materials into use. That’s something I’ve felt for a long time, and so this time, for the shoes I entered in ITS, I used it. 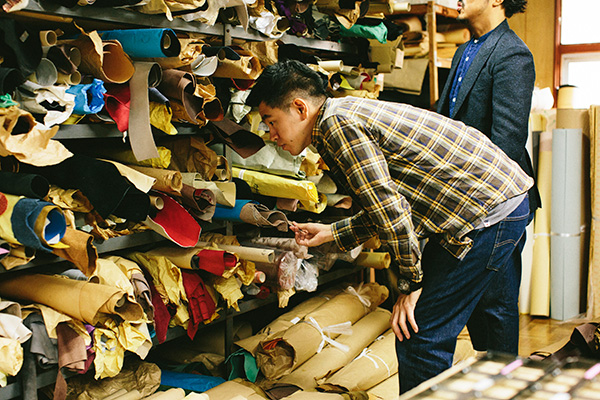 Uchiyama: Those kinds of feelings exist somewhere amongst us Japanese people, don’t they? Leather itself starts out as an animal hide, so for one I think we definitely need to have some gratitude for that.

Arai: We’re now in an era when “things” are produced in large quantities, and so it follows that those things are consumed simply. In an age like this, I have questions about society and the course of fashion. I want to place more value on the consideration people have for things, and the time and effort that goes into making them. As a designer who makes things, that sort of thing is something I always keep in mind.

Uchiyama: Wasn’t there a time in Japan’s past when there was a culture of patching together “rags” from materials? Back then, with the historical background of poverty and shortages, the feeling that people had to use one thing with care for a long time gave rise to those rags, I think. But the present is the complete opposite. Your works are that much more meaningful because we’re in this kind of age. With the embroidered designs like sashiko stitching and so on, I get a sense of the time and effort that have been put into them. 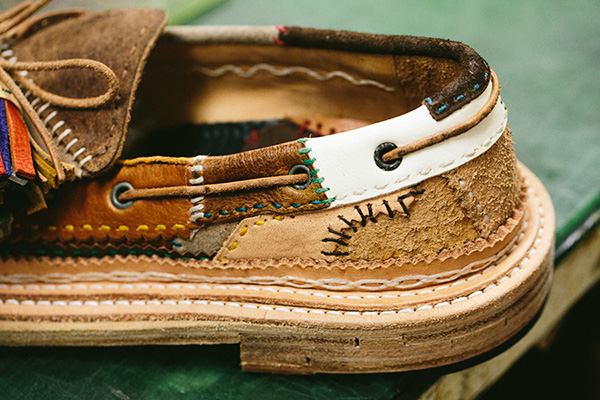 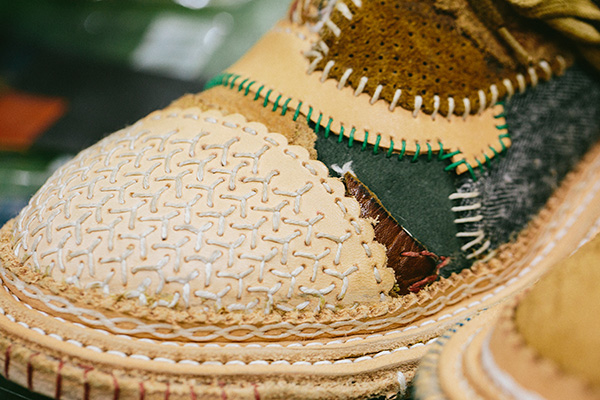 Arai: That’s right! The characteristic, natural mindset that Japanese people have, of using what we can use to the maximum extent; I wanted to express that kind of characteristic Japanese culture precisely because we’re in this day and age. Even in the midst of a great number of techniques, you can feel the love and warmth especially strongly in something that’s hand-sewn. It’s different from the past when people didn’t have things. In this age when we have everything, when I used things you could call luxuries like rich colors and materials using the method of sewing by hand, ironically, it represented a kind of antithesis of “modern footwear.” And, since I was entering a competition overseas, in Italy, in order to get across in some way that the maker is Japanese, I was conservative with the color and shape, and incorporated everywhere that delicate Japanese embroidery, like “sashiko” and “kogin-zashi.”

A product that can be appreciated for a long time, with “blank spaces”

Uchiyama: When I first had the chance to see your shoes, I was overwhelmed by how great they are. I wanted to tell as many people as possible about that excitement. It wasn’t practical to have these shoes made in countless pairs, but maybe somehow we could spread around the ideas like what you’ve been talking about just now, I thought. As a result of thinking about that, you ended up making these quilted tongues and tassels. Everybody wears lace-up shoes, right? So I thought, if we’ve got something you can put on easily like that, the customers might enjoy that. 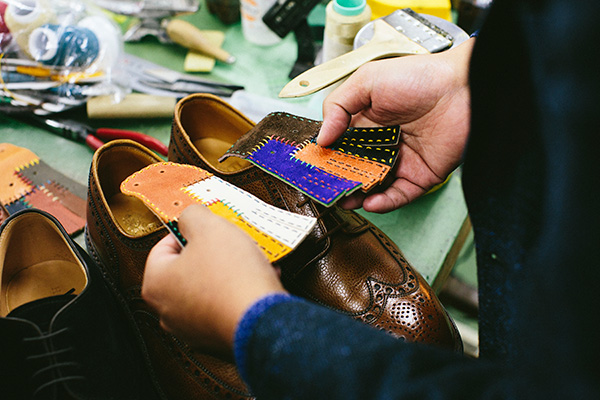 Arai: Personally, I wanted to put the skills and technique I have currently into something I can put in people’s hands, so when we had the chance to talk, I wad truly thrilled. The only thing on my mind was the thought, “as for the shoes…” When I received the proposal for accessories that are put on shoes, I thought it was a really good idea, one I didn’t come up with on my own. 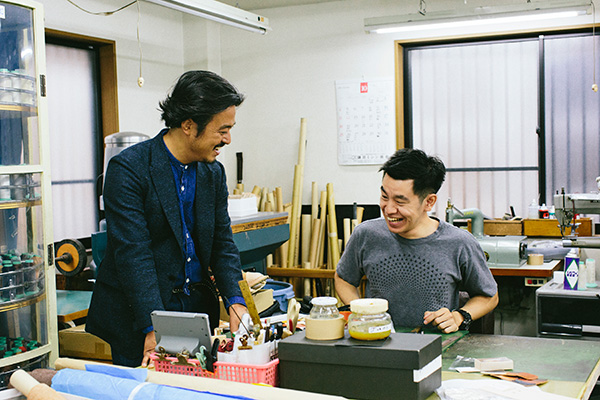 Uchiyama: The items we’re selling commercially this time are also all done by hand, and the work is done side by side with the craftspeople, right?

Arai: That’s right. With the help of the craftspeople, we’re making them together. I myself am responsible for everything up to the combinations of colors and leathers, and the color scheme of the stitching. I’m designing them in such a way that we’ll never make the same thing twice. But also, the exact level of pressure involved in the stitching, and the way the holes are made when it’s done by hand, these things differ from craftsperson to craftsperson, so the shoes differ one by one as well. We make this kind of unique product in the hope that people will use and enjoy them.

Uchiyama: There are some with a large amount of stitches and some with fewer. Having a few patterns made increased the number of options of course, and I think it will be fun for the customers themselves to add their own arrangements when using these items. Like, “It’d be cool if this kind of stitching or decoration went here, so maybe I’ll do that myself.” I feel like the items you make have these “blank spaces” that you can enjoy over a long period of time in that way. 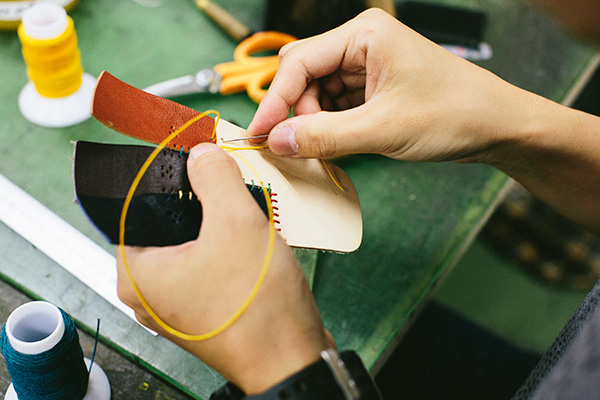 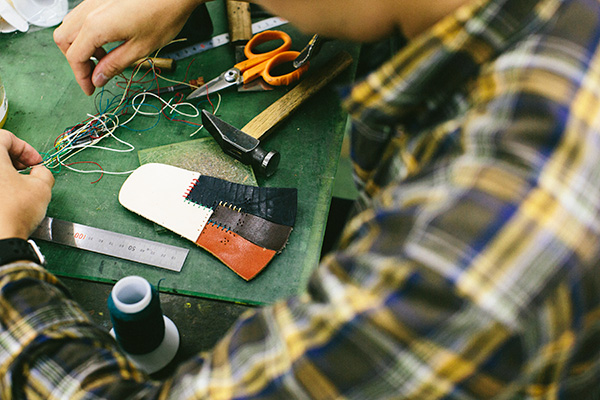 Arai: It’s just a matter of making openings in the leather and putting a thread through, so the work itself is simple and anyone can do it. It’s not a special technique. Like I said before, the way the craftspeople use their hands, their mood that day, those kinds of things are expressed in the products. Each one is different from the next. They’re not uniform, they’re not flat. I think they come out as something that has significance. I’m happy if, on top of that, the customers themselves who have bought them can also put some love into the items by putting time and effort into them in the same way.

Uchiyama: When the first phase of this project is over, is there something you have in mind next?

Arai: Actually, from the time when I started making the shoes that I entered in ITS, the keyword “upcycling” has stuck with me. The quilted tongues and tassels this time are both one thing that can add new looks to customers’ shoes, and that’s one way of putting upcycling into use. Before now I’d done a lot of making things from scratch, but through this project, by adding to and augmenting existing things, it’s been a way to alter the value of those things. I’ve experienced more of the potential of upcycling! After this, I want to incorporate this type of method into my craftsmanship, and broaden the scope of my craftsmanship. 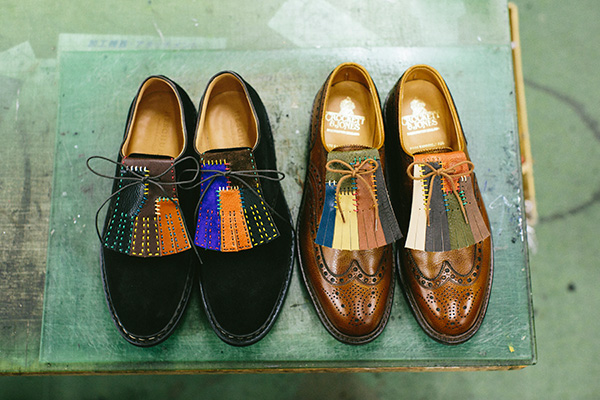 You can see these products at the UNITED ARROWS Online Store. 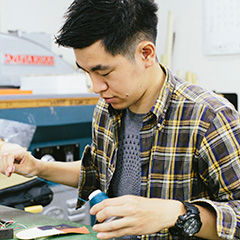 Shoe designer. Graduated from Kuwasawa Design School in 2005. Led the footwear department of an apparel brand in Italy. Won the YKK Special Award in the accessories category at the 2014 International Talent Support contest. www.takafumiarai.tokyo 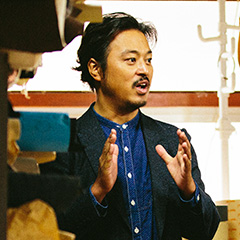 Chief buyer - men's, UNITED ARROWS. Born in 1975 in Fukuoka. After 10 years as a salesperson at the flagship store in Harajuku, became a buyer in 2007.

Shoe designer. Graduated from Kuwasawa Design School in 2005. Led the footwear department of an apparel brand in Italy. Won the YKK Special Award in the accessories category at the 2014 International Talent Support contest. www.takafumiarai.tokyo

Chief buyer - men's, UNITED ARROWS. Born in 1975 in Fukuoka. After 10 years as a salesperson at the flagship store in Harajuku, became a buyer in 2007.