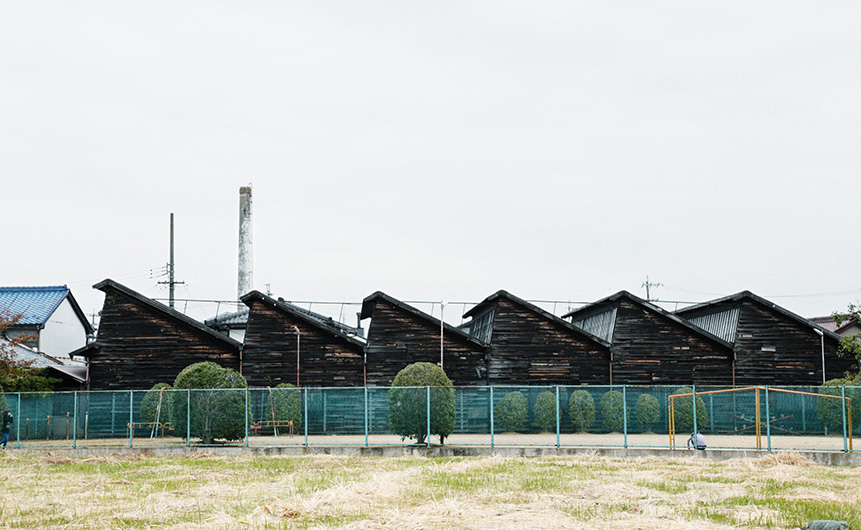 The Tweed Run Bishu 2015 was held in Ichinomiya just outside of Nagoya on Saturday, November 7th. The Bishu Region, centering around the area including Ichinomiya, is a location that Japan prides itself on internationally as a hub of wool production. Programs were lined up to visit and tour fabric factories along the event course, which turned out to be a great opportunity to learn about the ideas upon which Bishu wool is made. The clothes that you casually wear on a day-to-day basis might just be made with the fabric woven at these factories. In this feature, we will introduce you to how Bishu wool is put together and ideas concerning its production.

Why Bishu Wool is Top-class

The third holding of The Tweed Run in Nagoya took place in Ichinomiya, located in the Bishu region. Aside from the event’s concept of dressing up fashionably in tweed and enjoying a nice bike ride through town, The Tweed Run also aims for participants to “discover the charms of the town.”

The Bishu region, which played host to the event, boasts lines of buildings with a nice, old-fashioned feel. The town is pleasant with expansive, idyllic scenery, and at the same time, is also a location that sits in the limelight internationally as a world leader in wool production.

So what is it that makes Bishu wool so great? While there are many answers to that question, what we would like to focus on is the fact that the fabric is produced under a system of specialization. 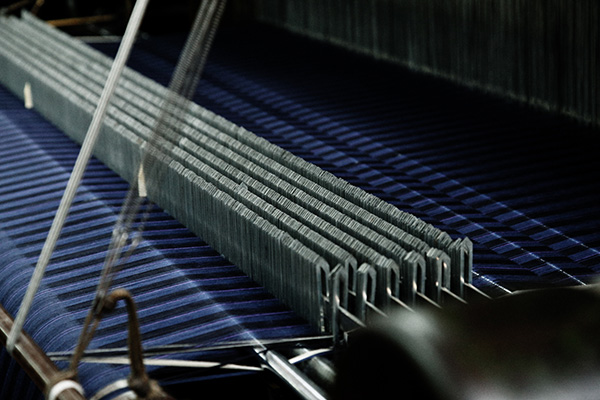 Weaving a single fabric takes largely three separate processes: “spinning & twining,” in which fibers of plants and animals are made into threads, “weaving,” in which the threads from the previous processes are woven to make textile units, and “processing & treating,” in which the completed textiles are processed and given finishing touches to make them into a saleable products. In Bishu, the work of each process is handled by specialist factories, with all producers turning out textiles as they leverage their own distinct touch and characteristics.

In The Tweed Run Bishu 2015, focus was placed on Bishu as a hub of wool production and points were set up along the cycling route to visit “weaving” along with “processing & treating” factories. Now, what kind of work, exactly, goes on in these factories?

We visited Kuzuri Keori Kogyo (“Kuzuri Wool Weaving Industries”), which is a long-standing factory that opened for business in 1912. Whereas a majority of factories these days are pushing forward with automation via computer operation, Kuzuri produces with a rare tool known as a Schönherr Loom that uses analog methods.

Textiles are produced by alternately laying warp and weft threads on top of each other. As the workers handle delicate threads in the process, the job requires a great deal of preparation and detailed work. The process can be largely divided into seven parts: 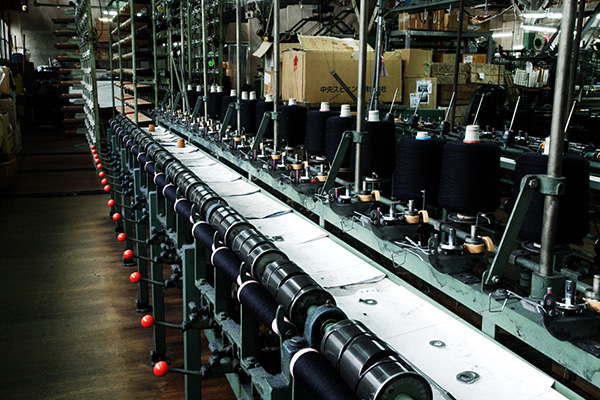 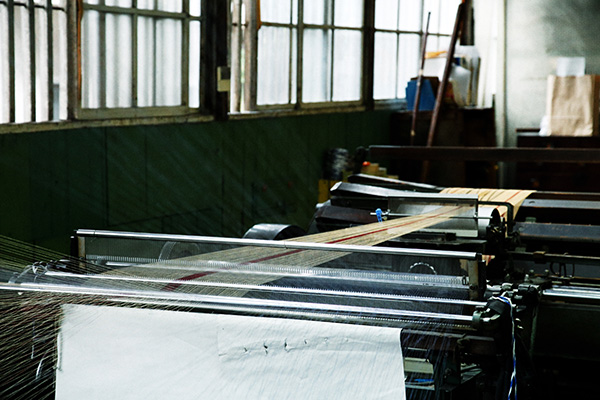 １：Preparing the warp
Prior to weaving textiles, all of the yarn is carried to the factory by the kilometer. Since the yarn cannot be woven in that state, it is divided up finely into the amount needed for the textile being made. It is then wrapped around a roller, at which time there are generally around 300 strands of yarn.

２：Warping
In this process, the warp threads that have been divided up are rolled around the roller. The rolling strength (tension) is adjusted depending on the resistance of the material and this task can have a significant impact on the outcome of the finished textile. Generally, it takes from 3,000 to 6,000 strands of warp yarn to weave one roll of fabric; however, with delicate threads, it can take up to 10,000. 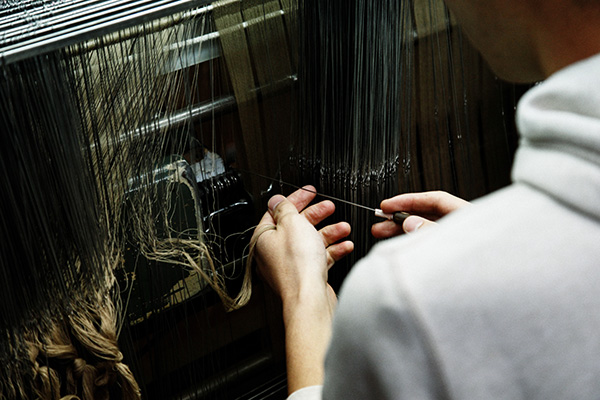 ３：Heddle passing
To pass the weft threads through, the warp threads need to be spread open vertically, which is handled by a tool called a heddle. Heddles have holes open in wire-like objects that are lined up lengthwise, and the warp threads are passed through these holes one thread at a time. Considering the amount of warp threads needed for one roll of fabric, this process can be quite tedious… 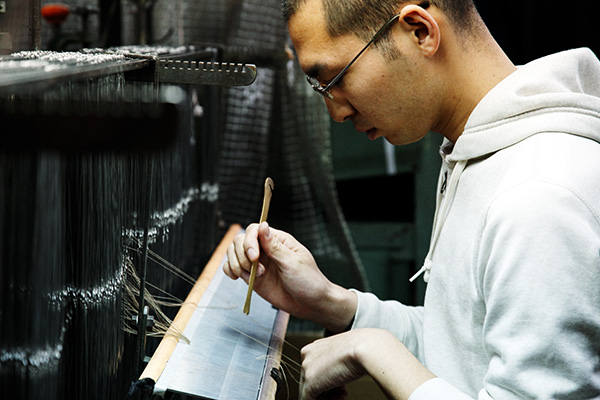 ４：Reed passing
A tool called a reed is responsible for adjusting the breadth and density of the textile. Two to four threads are passed through gaps separated by fixed intervals. The whole process reportedly requires a total of four days: roughly three days for heddle passing and one day for reed passing. 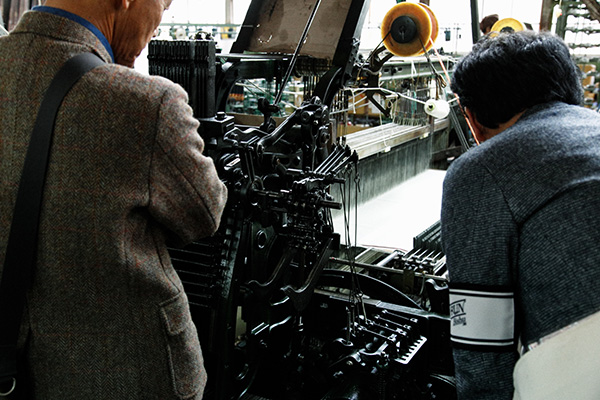 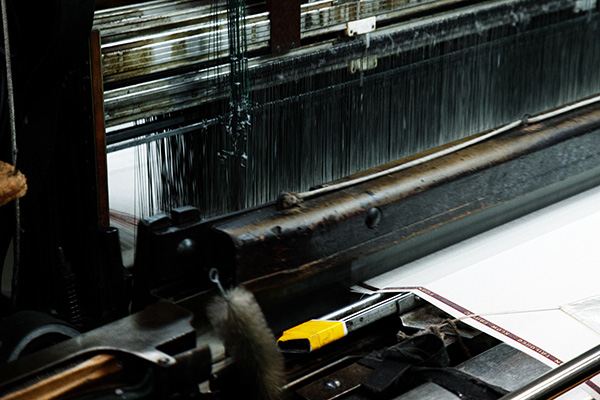 ５：Weft thread preparation
Weft threads are wrapped around a tube and set in a tool called a shuttle, which is shaped like a boat, in this step. The tube is moved left and right inside of the textile and weft threads are passed through it. One tube weaves fabric for about 30 centimeters, so a large number of tubes are necessary to weave fabric which may be up to dozens of meters in size per roll.

６：Completion
The tools which took nearly one week to prepare are set into the loom and the fabric is then woven.

７：Fabric Inspection
The textiles woven last are inspected for any defects, damage, or blemishes, bringing the weaving process to a close.

Computer-operated looms have mechanized these tasks and enable fabric to be woven efficiently. On the other hand, with the Schönherr Loom owned by Kuzuri Keori Kogyo, all of the respective groundwork is done manually, thus requiring pinpoint skills in addition to patience and effort – leading to a rich, gentle-to-the-touch texture in the completed fabric.

However, this Schönherr Loom does not support all weaving. Tools such as automated looms and the Schönherr Loom work together to support the industry by effectively leveraging their own respective characteristics.

Processing & Treating: The Process Responsible for Finishing Touches on the Product 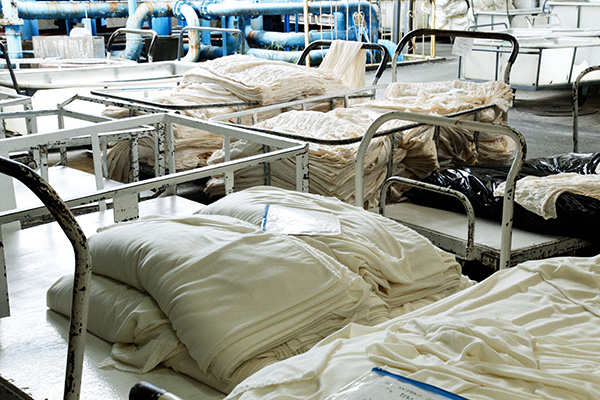 Once the weaving process is completed, the fabric moves on to a factory for treatment and processing. Fuji Seiju, which offered us a factory tour, is a factory with several kinds of equipment contained on its expansive premises. The factory mainly does washing, fulling, dyeing, raising, drying, and special processing of the fabric, which requires massive amounts of water. The argument can even be made that the reason Bishu prospered as a textile producer was that it had the abundant source of water known as the Kiso River. 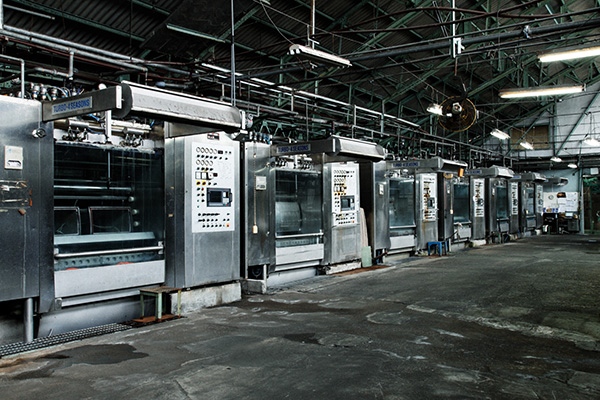 Washing and fulling
Textiles are first subjected to washing. The machine used to wash the fabric is equipped with a roller, and the fabric softens up as it comes into contact with the roller while it is being washed, eliminating any extra fibers. These rollers generally feature flat rubber, but Fuji Seiyu reportedly makes use of cypress wood with a rough surface. Apparently, the cypress wood brings some variation in the strength of the contact during one wash cycle, leading to a soft finish on the fabric.

When felt fabric is desired, the fabric is soaked in a special solution after the washing process and the task of fulling is done by applying friction and pressure to the fabric. Fuji Seiju also has equipment that handles both washing and fulling simultaneously. 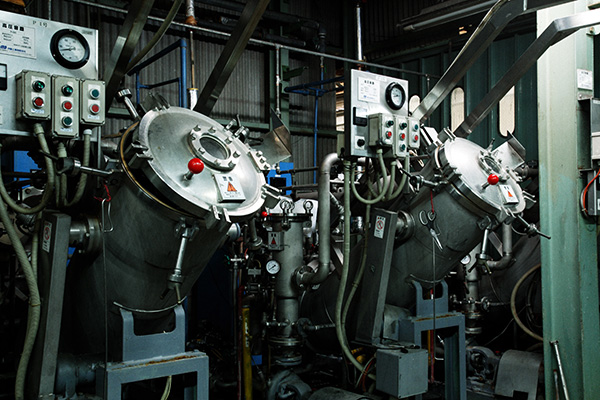 Dyeing
Dyeing is done by soaking the fabric in staining solution and applying heat. Depending on the material, such as cotton wool, or polyester, the pressure applied in dyeing varies and changes appear in the finish of the dye depending on the amount of fabric. The process therefore requires a great deal of equipment. Of course, the skill of the artisans to identify the appropriate machine to use according to the fabric is a valuable component here. 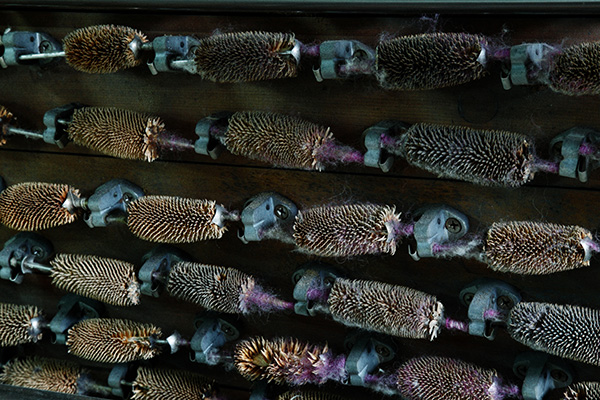 Raising
Using a plant with many key-shaped thorns called a thistle, a sense of raised threads is given to the fabric. The method of raising allegedly originated in Italy 300 years ago. Similar to the dyeing process, this process also requires some differentiation depending on the fabric material. For material with fine fibers such as cashmere, a roller with thistles distributed lengthwise is used to raises the fabric as though by scratching it. On the contrary, material with thick fibers such as alpaca fur are given the sense of being raised as though by pinching the material using a roller with the thistles distributed widthwise.

Incidentally, rollers equipped with metal needles are run over fabric with heavily raised threads, such as shaggy fabrics. The needles are placed alternately so as to be opposite the keys, making it so that the needles reach deeper parts of the fibers by repeatedly “scratching up” and “laying down” the fibers. 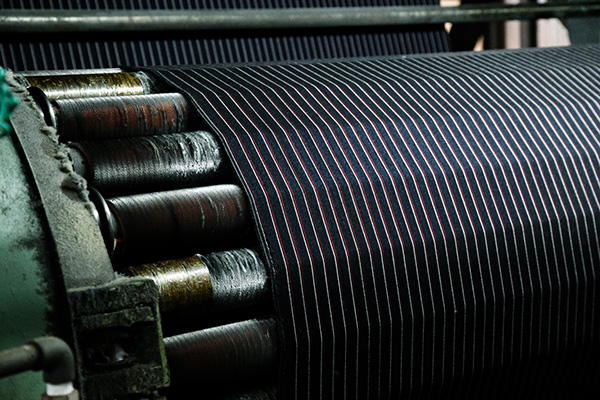 Drying and special processing
Fabrics that have been washed or dyed are placed in a dryer to dry. Inside the dryers used here, there are reportedly 10 levels of loops, enabling fabric of up to 100 meters to be dried in approximately five minutes. As necessary, water repellant and resin treatments are applied, putting the final touches on the fabric.

It is said that it is necessary to manipulate the function of the equipment slightly depending on factors such as the weather and humidity on the day that the tasks are carried out for these processing and treating steps. In other words – given the same fabric processed in the same way with the same equipment – the finish of the fabric will not be uniform. However, since the fabrics are industrial products, there is a fixed requirement for quality. To avoid creating scattered quality, the experience and skills of artisans are indispensable. 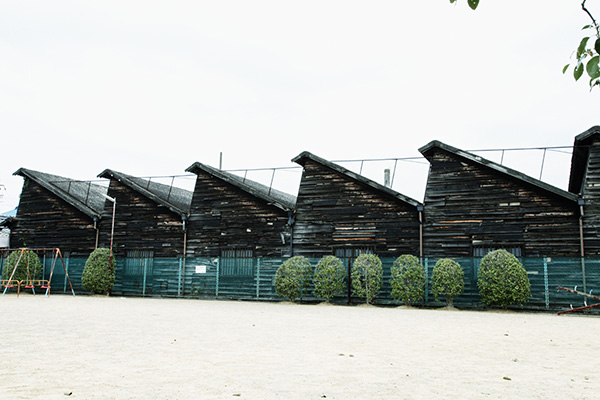 The Future of Bishu: A Region that has Experienced Ups and Downs

Originally a site of textile production dating back to the Nara Period (c. 710-794 A.D.), Bishu has carried on the tradition for generations. It has become a presence today worthy of the attention from the world’s top designers, yet along the way Bishu has experienced its fair share of hardship.

After World War II, price competition arose in the market as the Japanese economy grew, and the wool industry in Bishu – which had been producing high-quality fabric – went into decline. At the height of its prosperity, Bishu had nearly 8,000 factories; however, with competition intensifying drastically within Bishu itself, there are now around 2,000 factories. To top that off, of these 2,000 factories, there are apparently only a very few in operation. As a result of many producers feeling doubt under the conditions, they have stepped up their horizontal ties. 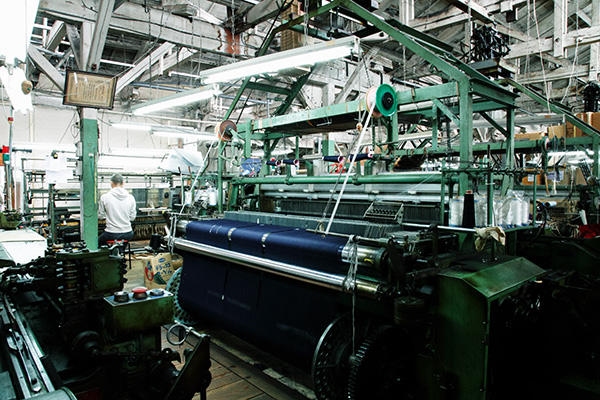 To begin with, the distinguishing characteristic of this region’s industry was “specialization,” which consequently refined and brought out the distinct touch of each and every one of the factories engaging in spinning, twining, and weaving, along with processing & treating. As a result, producers came to a mutual understanding and a desire to develop the local market was born.

Now in Bishu, numerous producers work together, hand-in-hand, to support the wool industry. It would be no exaggeration to say that their hard work, experience, and skills enrichen our fashion. Consequently, young people have taken an interest, and although there are still few people applying for work at factories in Bishu, the number of applicants is reportedly on the rise. The day that they inherit the knowledge and skills of the artisans and drive the industry forward may not be so far off. 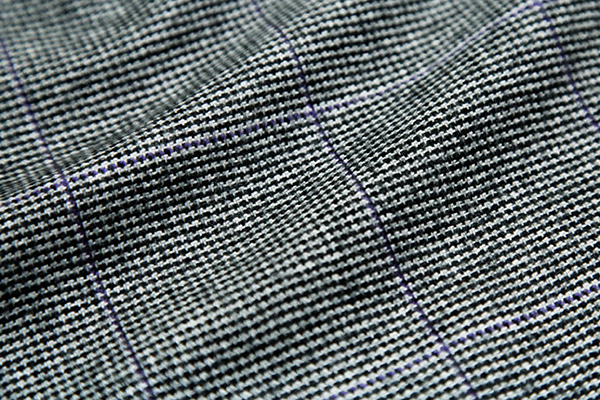 A detailed report of The Tweed Run Bishu 2015 is covered in HOUYHNHNM, so please go ahead and check that out, too.